The story of Christ’s sacrifice is a story told all year long. At Easter time the story has an even more special meaning. At this time of year while we focus on friends, family, and festivities it’s important to take time to stop and remember what Christ went through for us. It’s time to solidify all the details of his journey for our children. To remind them that Jesus was sent to save them from their sins. To remind them how much he loved us and what he was willing to do to protect us.

At our house we read Benjamin’s Box and we use Resurrection Eggs to remind our children of the details of Christ’s sacrifice.  There are a dozen eggs and each has a token inside to remind us of a segment of Christ’s journey.  Inside the first egg is a miniature toy donkey to represent Christ’s arrival into Jerusalem, the donkey symbolized him coming in peace.  The second egg contains coins to represent the betrayal of the priests.  The third egg holds a cup that reminds us of the last supper and sacrament.  The fourth egg has praying hands to show the time Christ spent in the garden before he was taken by the Roman soldiers.  The fifth egg contains a leather strip in remembrance of how he was beaten.  The sixth egg holds a crown of thorns.  The seventh egg holds a cross of nails which if you push the tip into your palm will leave a red mark and helps child have a visual of the holes in Christ’s hands and feet.  The eighth egg holds a die to symbolize the Roman soldiers gambling for Christ’s clothing.  The ninth egg holds a spear as to the one that pierced Christ’s side.  The tenth egg holds a piece of white cloth like what Jesus was wrapped in in death.  The eleventh egg is a stone like the one that blocked Christ’s tomb.  The twelfth egg is empty just as the tomb was empty on the third day because Christ lives! 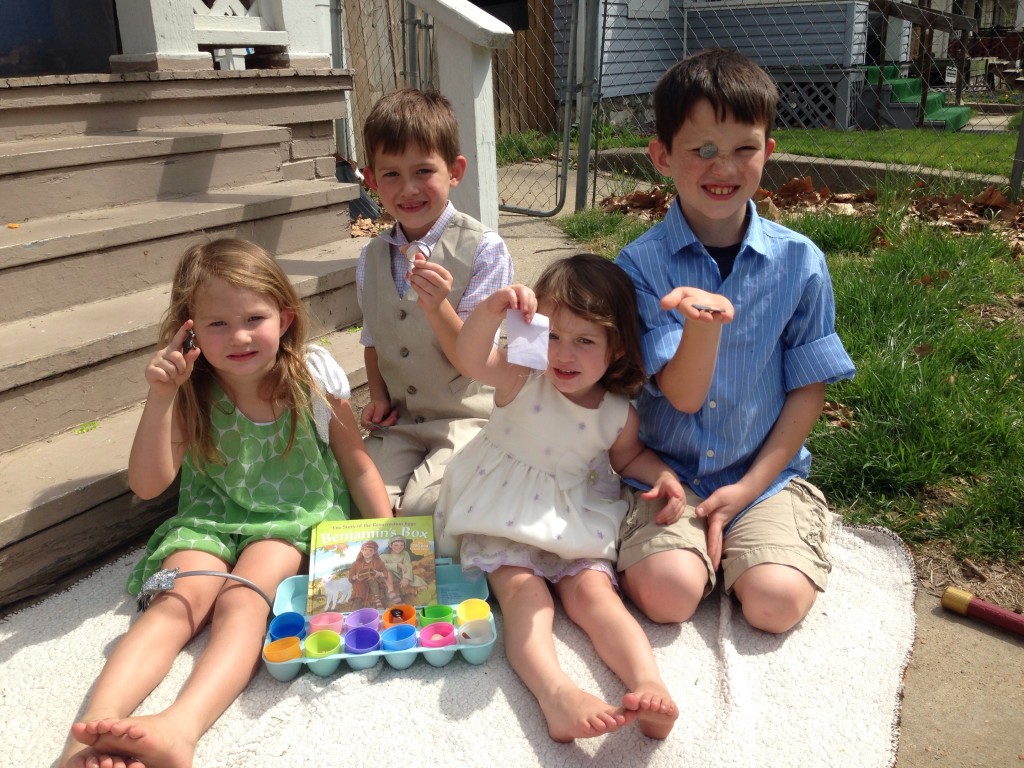 Resurrection Eggs are a wonderful tangible way for children to understand the story of Christ’s sacrifice.  Our little Vaylee, who just turned three, was  able to comprehend parts of the story and sat and listen for the duration.  Tylea, who is almost five, loved to hold each item and open the eggs to discover each treasure.  The symbolism helped Jax, age seven, and Zavien, eight-and-a-half, remember the order of events and importance of each token.  It was a fun and meaningful way to talk about the true meaning of Easter.