A natural parenting friend of mine posted on social media about her attorney and naturopath friend who called the Missouri health department after an altercation with Marion County health department.  State employees, at the Marion location, informed the mother that she was required to drive to Jeff City to obtain the religious immunization exempt cards needed for her child’s school records.  Employee’s would not give this mother and others the cards stating that the “State told them not to pass them out.”  Upset that the religious exemption law may have changed, the mother called the Missouri health department in Jeff City for clarification.  Jeff City assured her the law had not changed and she was to obtain the cards at her local health department.  The mother called the Marion department back to confront them about the situation.  After being transferred through several employees the mother was finally told “well we ran out of cards and people rarely take one and we are for vaccinations.”  The mother informed the state employee that she was not for vaccinations and that it was deceiving to tell parents that there was no religious exemption.  The mother asked when they would have the cards on hand in the future and was informed that there was no law that required the Marion health department to have the cards at their location.  The mother then informed the employee that she would be calling Jeff City to inform them of their refusal to carry the exemption cards.  The employee quickly backtracked her position and promised to call the state and order the cards.  The mother told her that she was happy to hear that they would no longer be misleading parents and they would supply the exemption cards.  The mother intends to check back on the status of the cards at the Marion health department and may be making some calls to friends in high places.  Marion employees might be shocked to find a huge package of religious exemption cards in the mail some day soon.

When I was in school, my parents also chose not to fully vaccinate my brother and I.  At that point in time the school nurse was the one to supply the exemption cards.  Depending on the nurse’s temperament and position on vaccinations it was either a simple exchange or altercation with her and my mother.  These employees have no rights to refuse to supply parents with these cards.  Whether it was the nurse in ’98, or the local health department employee in 2014, it is not their job to harass parents about their vaccination choices.  It’s merely their job to hand over the cards.

Missouri parents have the legal right to supply their child’s school with a religious exemption card for immunization requirements.  This card can be obtained at local county health departments or ordered from the following website.  I have had several friends order from the website and received their cards promptly and without altercations with misleading state employees.  If a state employee tells you that the state is not allowing them to hand out religious exemption cards, they are wrong.  Inform them of the law and their requirement to provide you with the card when asked.  It is not legal for them to deceive parents and refuse to supply the cards on this pretense. 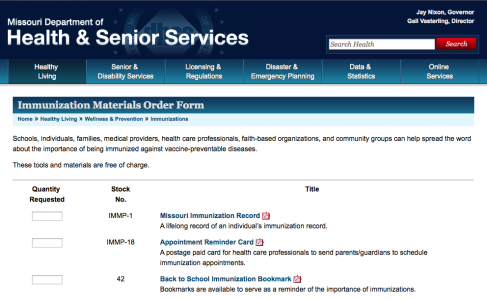